The Winter Olympic Village is completed and delivered to the Beijing Organising Committee for the 2022 Olympic and Paralympic Winter Games on June 26, 2021. The village, consisting of 20 residential buildings, covers an area of 330,000 square meters. It is divided into residential and operational sections. Photo shows the photovoltaic power generation system of the Winter Olympic Village. (People's Daily Online/Hu Qingming)

Eight competition venues in the two competition zones were completed at the end of 2020, and their supporting facilities have all met requirements in the testing and operational stages and are ready for test events. The venues have passed an all-round examination of corresponding international sports organizations.

Seven of the nine non-competition venues have been completed. So far, the Winter Olympic Village and National Convention Center Phase II, or the Main Media Center (MMC) for the 2022 Beijing Winter Olympics and Paralympics have been delivered to the Beijing Organising Committee for the 2022 Olympic and Paralympic Winter Games. The "Ice Jar" comprehensive training center was also completed and has gone through acceptance inspection.

Photo taken on July 19, 2021 shows the giant screen on Linglong Tower showing 200 days to go till the opening ceremony of the 2022 Olympic Winter Games in Beijing, capital of China. (People's Daily Online/Liu Xianguo)

The National Convention Center Phase II is the largest newly constructed project in the Beijing competition zone. It will receive over 3,000 journalists and around 12,000 broadcasters during the Winter Olympic Games. The steel-structured building, covered by 2,376 curtain wall units in the shape of a huge mythical bird, showcases a design concept of harmonious coexistence between architecture and nature.

As the last project of the 2022 Beijing Winter Olympics and Paralympics to break ground, the construction and renovation of the National Stadium, also known as the Bird's Nest, started on July 4, and will be completed in October this year.

According to Yu Dequan, deputy director of Beijing Major Projects Construction Headquarters Office, the Yanqing competition zone, with the highest altitude of 2,198 meters, faced the most difficulties in construction among all the three competition zones. When the project just started, there was no water supply, road, power supply or communication network in the competition zone. The ecological restoration was even more difficult than building a new venue, Yu said.

To protect the environment on Xiaohaituo Mountain, where the Alpine skiing, bobsleigh and skeleton and luge events will be held, the Yanqing competition zone has always taken ecological conservation as the first priority. Before the restoration project was implemented, a background investigation of the ecological environment was jointly conducted by the forestry, environment and ecology experts. They tailored protection plans for every tree on the mountain based on how much impact it shoulders from the construction. So far, in-situ protection has been done for 313 trees, and 24,272 have been transplanted to a nearby protection base covering nearly 300 mu, or 20 hectares of land. About 91 percent of the transplanted trees survived. In addition, 11,027 shrubs have been transplanted and are now taken good care of by professional organizations.

The National Speed Skating Oval is the only newly constructed venue hosting ice events for the Beijing 2022 Winter Olympics. With a novel design, the venue features high construction difficulty and application of new technologies. It is the first large venue in China to massively employ domestically produced high-vanadium sealing strands, and around its exterior there are "flowing ribbons” made up of 3,360 pieces of glass. Introducing carbon dioxide refrigerants for ice-making, the venue boasts an ice surface of around 12,000 square meters, the largest in Asia. So far, the National Speed Skating Oval has applied for 34 national patents, and 8 have been certified. 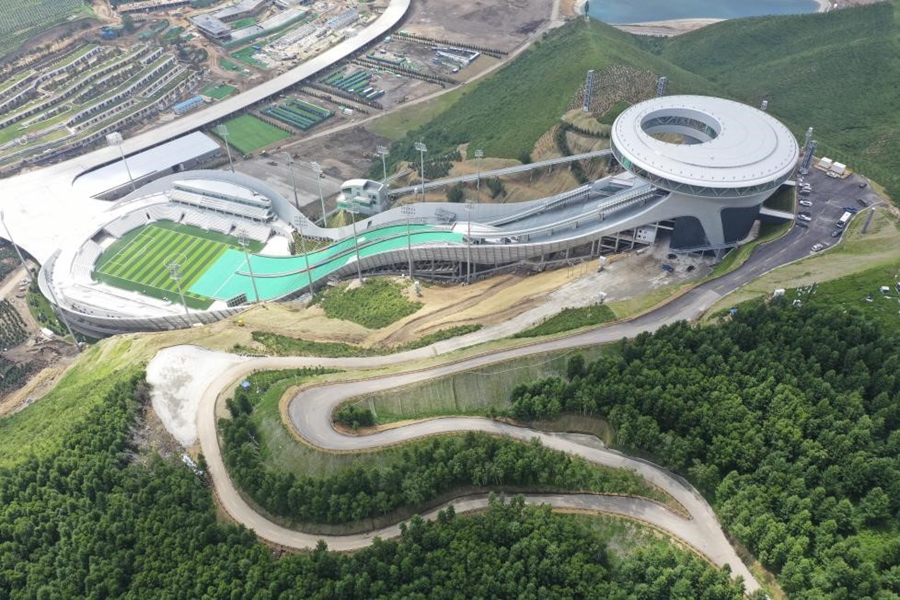