By Hu Yuwei in Ningxia

The grape wine growing base at the eastern foot of Helan Mountain in Northwest China'sNingxiaHui Autonomous RegionPhoto: Courtesy of Yuanshi Vineyard

The eastern foot of Helan Mountain in Ningxia was once regarded as a "golden zone" in the world for wine grape growth with sufficient sunshine, little precipitation, a large temperature fluctuations, and low humidity. It is the fruit of the Chinese national pilot zone to develop premium wine on the edge of the Gobi Desert, aiming to turn the eastern foothills of Helan Mountain into China's Bordeaux, by reversing past over-exploitation to today's green energy model.

Driving in the 2,000 mu (133.3 hectares) stretch of vineyards, clusters of purple grapes hang from the vines at the vast Gobi desert as far as the eye can see.

"Isn't it hard to imagine that this used to be a sand pit where almost nothing grew?" a local official said to the visiting Global Times reporter. "The vineyard is just one of many ways in which Helan Mountain's sand pits are transformed into greenery."

Since the 1950s, Helan Mountain's rich reserves of coal, silica, and other resources have led to haphazard mining, resulting in the destruction of mountain ecology.

In May 2017, Ningxia launched a campaign to protect the ecology of Helan Mountain, comprehensively regulating 169 human activity sites in the protected area.

Ningxia's resolution to restore Helan Mountain, which was scarred by brutal and radical mining in the past, is also a new journey for local people in seeking a harmonious coexistence with nature.

Since 2017, 83 mining qualifications have been withdrawn and mining facilities in 50 construction sites were dismantled in Helan Mountain Protection Zone, with a total investment of nearly 10 billion yuan.

"Economically, the losses are big, but ecologically, the benefits are definitely there," a local official admitted to the Global Times.

Helan Mountain, located in the northwest of Ningxia Hui Autonomous Region, is an important ecological security barrier in Northwest China. It was listed as a national nature reserve in 1988, mainly protecting natural ecosystems and biodiversity in arid mountainous areas, including precious, rare, and even endangered animal and plant species and habitats.

However, as a result of extensive development for a long time, the exploitation of resources, the illegal construction of projects, and the disorderly development of mining industry in the reserve have repeatedly crossed the red line, causing great damage to the ecological environment of the reserve.

Since May 2017, the local government has raised 1.41 billion yuan to fully support the comprehensive improvement of the ecological environment in the Helan Mountain National Nature Reserve. Through the implementation of mine blocking, pit backfilling, slope dressing, and other governance measures, 200 square kilometers of the protection zone have been renovated and repaired, Ai Hongbin, the office director of the Department of Natural Resources of Ningxia Hui Autonomous Region, told the Global Times.

At the same time, local environmental protection departments and courts, prosecutors, public security, and other organs have formed a joint law enforcement team to step up efforts to crack down on illegal activities such as stealing and transporting mineral resources.

In the process of rectification, the closed coal mining enterprises have been awarded compensation in accordance with the law, and their workers have been properly resettled, Ai stressed.

Meanwhile, the local government vigorously supports enterprises investing in ecological restoration, such as those developing the wine industry, and encourages and supports social capital to participate in ecological protection and restoration, according to Ai.

An eco amusement parks has sprung up out at the foot of Helan Mountain Photo: Courtesy of Yuanshi Vineyard

From mining to golden land

While in a few decades, the edge of the Gobi Desert has been transformed by expansive vineyards irrigated by water sourced from the Yellow River.

Currently, the coverage of vineyards in Ningxia accounts for one fourth of China's total, yielding 36 high quality grape varieties. There are 211 wine chateaus - completed or under construction - with an annual output of 130 million bottles of wine, accounting for 60 percent of China-produced wines, the Xinhua News Agency reported.

Yuanshi Vineyard, visited by the Global Times, has created a traditional Chinese garden-like winery by reusing abandoned construction materials from an abandoned sand mine.

It is hard to imagine that the winery, which covers an area of 136.6 hectares, was formerly a major home of sand and gravels production full of dark slag and noisy machinery.

"At that time, few people cared about ecological conservation, but mainly about how to make the best use of resources," the local official told the Global Times.

In 2008, local enterprises contracted more than 133.3 hectares of pit land to build wineries and develop grape planting. At the same time, leisure parks were built in mining subsidence areas and ecological parks are turning up in abandoned mines. 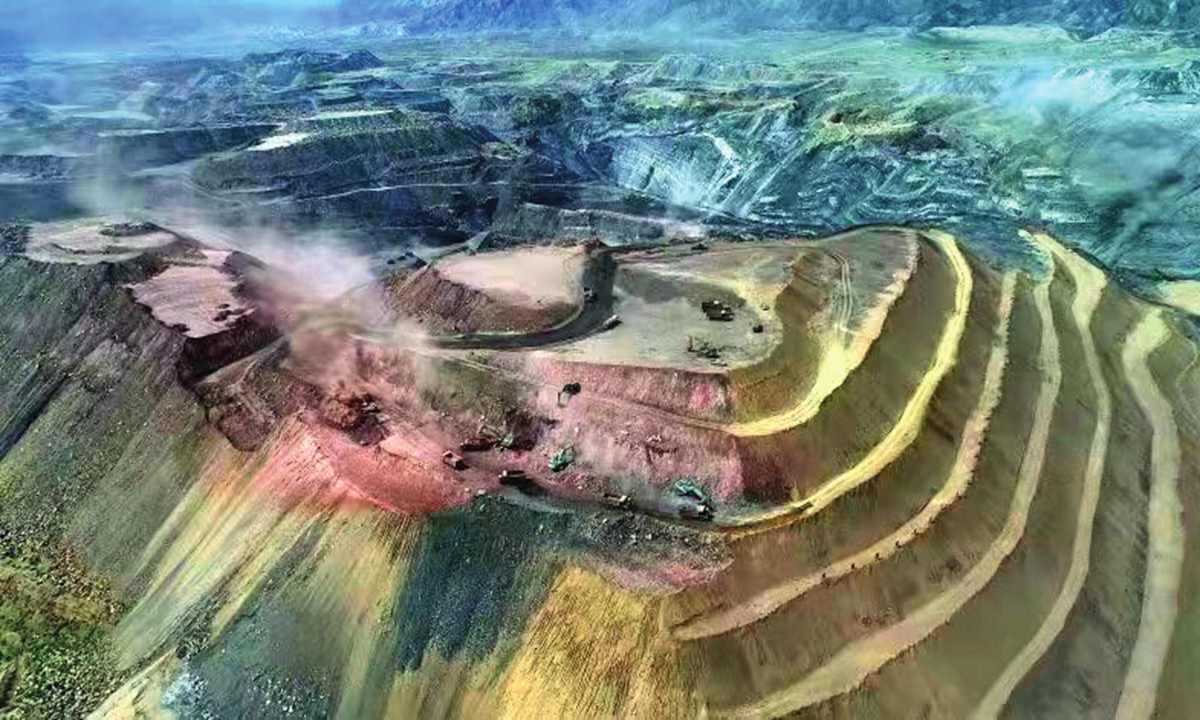 Historical scene of widespread mining and exploitation at the foot of Helan Mountain in Ningxia Photo: Courtesy of Ai Hongbin

Qiao Jing, the manager at the Yuanshi Vineyard, told the Global Times that the wine industry has greatly boosted the local economy and employment. The average salary of the wine farm has increased by 5 to10 percent annually.

Due to the decrease in the amount of imported wine during the COVID-19 epidemic, a boom in local wine also benefited the development of supporting industries in the surrounding villages, such as hospitality and themed tourism, said Qiao.

"From sand mining to growing grapes, there are clear ecological and social benefits from the industrial transformation. The Yuanshi Vineyard created more than 2,000 seasonal posts for local employees and more than 300 perennial workers, which brought about a great increase in income to local villagers," Ai told the Global Times.

A hard road to hoe

The restoration and greening of the mine has been a careful process amid geological hazards. The pit formed by open-pit coal mining and the slag accumulated in ditches can easily trigger a shaft collapse. In case of heavy rain, it may also cause debris flow, which could pose a threat to the lives of nearby village residents and farmland at the foot of Helan Mountain, according to local officials, noting that the way the pit is backfilled was carefully designed by experts.

Similarly, the choice of vegetation for the Gobi Desert has been well studied. According to the local ecological restoration plan, the vegetation coverage of Helan Mountain National Nature Reserve will have increased to more than 65 percent by 2025, and the ecological reclamation of the historic mines will be at 100 percent.

"Ecological conservation and restoration are not in opposition to economic development," Ai said. He believes that the ecological process of Helan Mountain reserve reflects Ningxia's evolutional economic structure and developmental momentum.

Nowadays, more sports parks and eco amusement parks have sprung out at the foot of Helan Mountain, which have become urban eco-friendly attractions integrating tourism, sports and wine culture experience. The abandoned sandpit that were ravaged by wind in the past are now turning into a vibrant oasis.