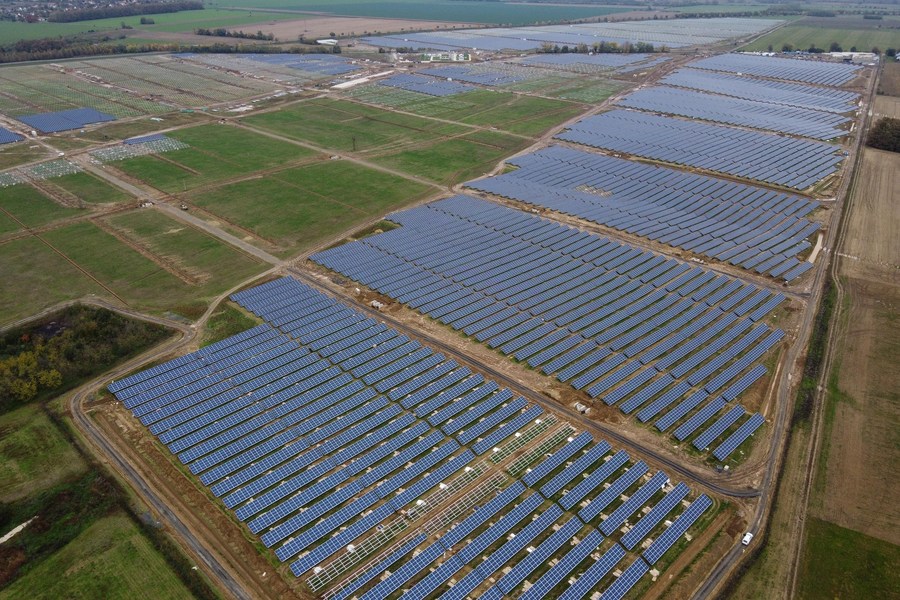 China's recent announcement about stepping up support for other developing countries in developing green and low-carbon energy and not to build new coal-fired power projects abroad makes the Belt and Road Initiative more appealing, experts have said.

NEW YORK, Oct. 2 (Xinhua) -- The Belt and Road Initiative (BRI) continues to be seen as an opportunity of development especially for developing countries as global decarbonization efforts and their ramifications come into focus ahead of the 26th United Nations Climate Change Conference of the Parties (COP26) in Glasgow.

China's recent announcement about stepping up support for other developing countries in developing green and low-carbon energy and not to build new coal-fired power projects abroad makes the BRI more appealing, experts have said.

The BRI remains attractive to the majority of countries in the world as it addresses development needs neglected by other institutions or initiatives, experts said.

"The BRI remains the most ambitious developmental initiative inspired by a major economy in the 21st century," said Vasilis Trigkas, postdoctoral fellow with Schwarzman College of Tsinghua University.

This announcement on coal-fired power projects suggests that the BRI can be grounded in a viable model of public leadership, finance and economic growth, Pang said.

Citing data from the World Health Organization, Pang noted, "one third of the world's population is still without safe drinking water in the 21st century," which testifies to the insufficiency of the current development model led by existing financial institutions such as the World Bank (WB) and the International Monetary Fund (IMF).

The BRI remains attractive to developing nations because it is the pathway defined by the scientific education of workforces, the transfer of advanced energy-intensive technologies, and the integration into a modern system of high energy use per capita, said Richard A. Black, the Schiller Institute's representative at the United Nations.

"The BRI is already a bright white pearl amidst a shore of dull sand," Black told, voicing high expectations for the initiative.

China offers an alternative, which reconnects the "underdeveloped" parts of the world with each other for common development, said Pang, who believes that the BRI may help with the return of a multi-polar world marked by true globalization.

A more balanced approach has been called for as decarbonization at the cost of development triggers deep concerns and market volatility.

China's Global Development Initiative calling for "a new stage of balanced, coordinated and inclusive growth" and staying committed to development as a priority is the most important and revolutionary proposal at the just-concluded United Nations General Assembly, Black said.

Climate change and energy poverty are the two sides of the same coin, which needs to be addressed by the global community, said Mohammad Barkindo, secretary-general of the Organization of Petroleum Exporting Countries.

"We are facing energy poverty in the vast countries of the developing world" and what is happening in Britain and many parts of Europe is what many people around the world live day after day, Barkindo said at an online dialogue on Monday.

All sources of energy will be required for the foreseeable future and what is required is the deployment of appropriate technologies supported by appropriate policy measures, he added.

It's high time for political leaders in the rich West to speak the truth, admitting that "we can't today have a 100 percent renewable-based energy system because you can't store renewable energy," said Majid Jafar, CEO of Crescent Petroleum, headquartered in the United Arab Emirates.

Jafar warned that trying to stop investment in the oil and gas industry would be dangerous and people will end up turning to dirtier and cheaper fuels like coal even in Europe.

Underinvestment in the oil and gas industry is the driving factor for today's fuel price spiral in Europe with switch from gas to coal and to a lesser extent Asia seeing switch from gas to oil, said Shirley Zhang, principal analyst with Wood Mackenzie.

Suppliers, traders and investors have all become extremely cautious when responding to prices due to the rising pressures from environmental, social and governance push, Zhang told Xinhua.

Zhang said that since coal remains the cheapest reliable fuel in most of the Asia-Pacific till the end of the decade, project cancellation or cessation of potential funding would certainly increase energy cost and supply chain risk in key manufacturing bases such as Vietnam.

Right now, policymakers in countries such as Indonesia, Vietnam and Malaysia deem low-carbon priorities as a cost on top of that already unaffordable figure, according to Pang, a senior fellow at the Rajatatnam School of International Studies under the Nanyang Technological University in Singapore.

"This impossible-looking situation can only be turned around if green development becomes cheaper and they get richer. They need transformative, market-making steps that lower the cost of green development and price-in the environmental cost of fossil-fuels. At the same time the region must continue to grow," Pang said.

"The nexus between these priorities is going to be the Belt and Road's building of connectivity with each other and with their largest trade partner. This is its infrastructure-linked growth multiplier," Pang said.

China has dramatically lowered the cost of solar and wind energy, high-speed rail and telecommunications and demonstrated the snowballing effects of infrastructure-led development, said Pang, adding that China can do the same for green development.

China's own development miracle in terms of poverty alleviation and application of advanced technologies has motivated other countries to join the BRI, according to Black.

It perhaps is a promising path for the Asian Infrastructure Investment Bank to join forces with the IMF, the WB and the Asian Development Bank in prompting green and low-carbon projects in other developing countries, Trigkas said.

The combined technical and capital pool of those institutions is extraordinary. If they manage to strategically pool their resources together in this regard, they can really have a significant impact in humanity's "war" against climate change, he added.