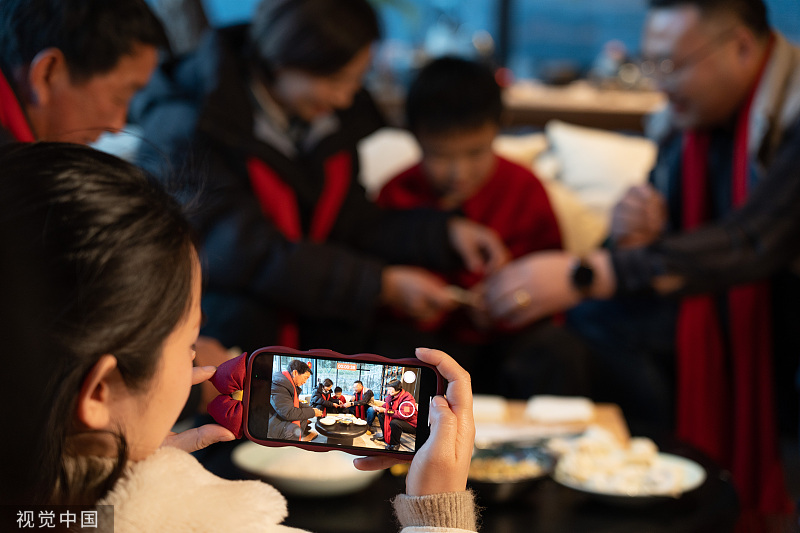 A woman takes a photo of families making dumplings in Huangshan, Anhui province, on Jan 11, 2023. [Photo/VCG]

China's catering market is expected to show a structural rebound during the Spring Festival, CCTV reported on Friday, citing a study by the China Chain Store & Franchise Association.

The demand for fast food and tea drinks is projected to be relatively large in transportation hubs and tourist attractions, driven by the Spring Festival travel rush and the recovery of the tourism industry during the holiday.

The demand for dinner, hot pot and tea drinks is expected to be strong during family reunions and friends gatherings in this year's Spring Festival, according to the study into chain catering and tea drinks companies.

In terms of development strategy in 2023, nearly 50 percent of surveyed enterprises said they will continue to maintain stable development and the industry as a whole will stabilize and recover in 2023.

About 17.2 percent of enterprises said they would go all out to open stores, mainly focusing on tea and fast food.

In addition, as the Spring Festival holiday approaches, supermarkets across the country are seeing their businesses pick up. The sales forecast of most supermarkets is much greater than in the same period last year.

The recovery of the consumer market will be further promoted with people returning home for Chinese New Year, getting together with families and preparing food and gifts for families and friends.

Most of the supermarkets project steady sales growth of rice, flour, grain and oil, seasoning and vegetables, sharp sales rise of fruit and meat, and sales growth potential of frozen food such as prepared food and food for hot pot, the report said.