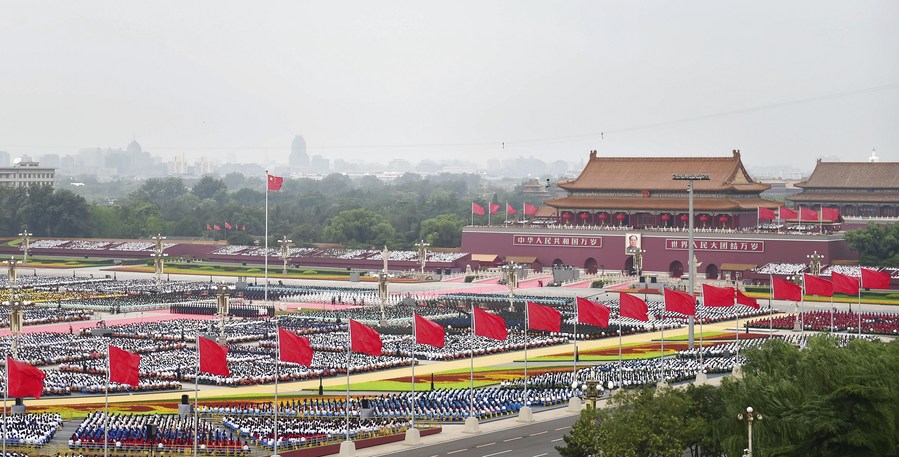 A ceremony marking the centenary of the Communist Party of China (CPC) is held at Tian'anmen Square in Beijing, capital of China, July 1, 2021. (Xinhua/Chen Zhonghao)

BEIJING, Dec. 7 (Xinhua) -- Xi Jinping, general secretary of the Communist Party of China (CPC) Central Committee, has stressed resolute adherence to the path of socialist rule of law with Chinese characteristics, and advancing the development of such a system.

Xi made the remarks while speaking at a group study session of the Political Bureau of the CPC Central Committee on Monday.

Noting that China is now at a critical stage toward achieving national rejuvenation, Xi urged efforts to raise the capacity and level of law-based governance in all respects, and provide a strong legal guarantee for building a modern socialist country in all respects.

Acknowledging the historical achievements in building the system of socialist rule of law with Chinese characteristics since the 18th National Congress of the CPC, Xi stressed that China has embarked on a new journey, which creates new and higher demands for rule of law.

Stressing the commitment to a people-centered approach, Xi said that the requirements of representing the people's interests, reflecting their wishes, protecting their rights, and furthering their wellbeing should be integrated into the whole process of building the legal system.

Xi called for further efforts to promote the legislative work in key areas including national security, scientific and technological innovation, public health, biosafety and biosecurity, ecological conservation and risk prevention, and focus on the key task of raising the quality of legislation.

Calling for improving the mechanism to ensure that everyone is equal before the law, Xi said that all acts violating the Constitution or other laws must be held accountable.

Xi also required stepping up the oversight of the legislative, law-enforcement, supervisory, and judicial powers and improving the training of legal practitioners.

Xi urged continuous efforts to crack down on corruption in law enforcement and judicial fields in accordance with the law, combat organized crime and root out local criminal gangs on an ongoing basis.

Stressing enhancing the legislation in areas related to foreign affairs, Xi called for promoting the development of the system of laws for extraterritorial application.

He highlighted the necessity of advancing the development of the discipline system, academic system, and discourse system of legal science with Chinese characteristics. He also called for stepping up political guidance for lawyers.

Calling for progress in ensuring the law is observed by everyone, Xi stressed guiding the general public to consciously abide by the law, turn to the law when they need assistance, and rely on the law to solve their problems.