-- Under the banner of "Build a Community with a Shared Future for Mankind -- Innovation & Opportunity," the China Pavilion gives center stage to the country's latest achievements.

-- China is ready to enhance exchanges and cooperation with other countries to seize the opportunities for innovation-driven development and actively promote the building of a community with a shared future for mankind.

-- The domestically developed technology of China has not only served the Chinese people, but has also been applied in such areas as land mapping, precision agriculture and smart ports in regions including Southeast Asia, South Asia, West Asia, Eastern Europe, and Africa.

DUBAI, Oct. 1 (Xinhua) -- Departing from Beijing, passing through Shanghai, then traveling all the way to Abu Dhabi before arriving at Dubai ... visitors of different nationalities take turns to enjoy a "test drive" in China's high-speed train for a dreamlike virtual trip.

The railway simulator, featuring a model of the locomotive and cockpit of China's Fuxing bullet train, a notable feat of the country's railway technological innovation, is one of the dazzling displays inside the lantern-shaped China Pavilion at the Expo 2020 Dubai, which opened its doors on Friday.

Under the banner of "Build a Community with a Shared Future for Mankind -- Innovation & Opportunity," the China Pavilion gives center stage to the country's latest achievements in such fields as space exploration, information technology, and artificial intelligence (AI), offering a futuristic vision for the better life of human beings. 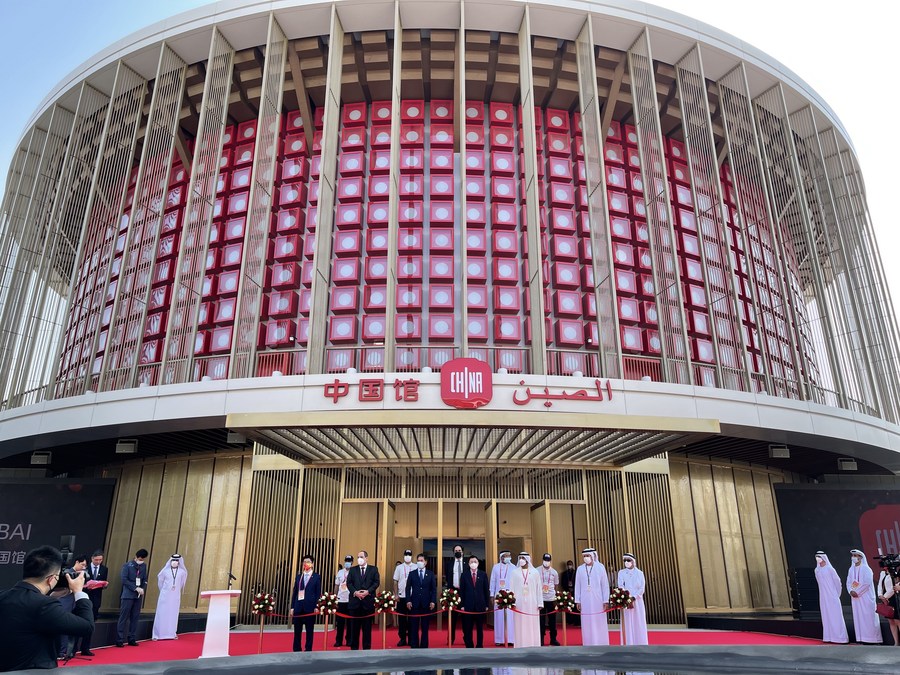 Photo taken on Oct. 1, 2021 shows the opening ceremony of the China Pavilion of Expo 2020 Dubai in Dubai, the United Arab Emirates.(Xinhua/Su Xiaopo)

In a video message for the China Pavilion, Chinese President Xi Jinping on Friday wished the expo a "full success," saying that China is ready to enhance exchanges and cooperation with other countries to seize the opportunities for innovation-driven development and actively promote the building of a community with a shared future for mankind.

After an opening ceremony in the morning, the red-and-golden China Pavilion opened to welcome visitors who had been eagerly lining up in front of the gate.

Youssef Allam, an Egyptian boy, had been waiting patiently outside the pavilion with his family long before the doors opened. "This is the first pavilion I need to visit," said the 9-year-old who lives in Dubai.

"I watched some Youtube clips and got to know that there are a lot of cool exhibits about technology here," he said.

His father Hussein Allam said China is such an important country contributing greatly to the world in terms of economy and technology that the China Pavilion is a must-visit destination.

Dennis Ng, who is from China's Hong Kong and now works in Dubai, arrived at the China Pavilion with his wife and three sons right after entering the expo site.

"Today is our National Day, so it is especially meaningful for us to bring the kids to see the China Pavilion," he said.

China's National Day falls on Oct. 1 every year, coinciding with the opening of the expo this year.

FROM PAST TO FUTURE

"I was attracted to the China Pavilion by the architecture because it is so beautiful outside," said 14-year-old Andora Dyerramberg, who is originally from Norway and living in the United States.

The exhibition in the pavilion proves that China is a very innovative country, she said. "The light in the space exploration area is great, and it was a fun experience 'driving' the bullet train."

Covering an area of 4,636 square meters, the China Pavilion was designed with inspiration drawn from the traditional Chinese lantern, symbolizing hope, light and gathering.

In contrast to the appearance of the pavilion which was designed to reflect culture and traditions, the exhibits inside focus on innovation and technology, shedding light on a rapidly developing China.

The space exploration area introduces the audience to some major achievements such as the Chang'e-5 probe, which has successfully brought home lunar samples, and the Chang'e-4 probe that is still performing its task on the far side of the moon.

A hall with circular screens simulating a scene from outer space attracted many visitors to linger. It is an exhibition about China's BeiDou Navigation Satellite System.

The domestically developed technology of China has not only served the Chinese people, but has also been applied in such areas as land mapping, precision agriculture and smart ports in regions including Southeast Asia, South Asia, West Asia, Eastern Europe, and Africa.

A friendly panda robot is a superstar at the pavilion. Surrounded by curious visitors, the black and white creature "Youyou" introduced itself, pulled off some tai-chi moves and wielded a calligraphy pen with a flourish, attracting many visitors to take photos with it.

Photo taken on Sept. 29, 2021 shows a tour guide robot at the China Pavilion of Expo 2020 Dubai in Dubai, the United Arab Emirates.(Xinhua/Yan Jing)

"Technology is the most impressive part of this pavilion. We were prepared for that, since we knew that China had achieved a lot in technology," said Waty Luc, who had traveled all the way from France with his wife and daughter to see the expo.

After being delayed by COVID-19 for a year, the Expo 2020 Dubai has been a much-awaited event to bring the world together.

China is willing to share its ideas and achievements with the world by participating in the World Expo, said Zhang Shenfeng, commissioner general of the China Pavilion and vice chairman of the China Council for the Promotion of International Trade.

The China Pavilion aims to demonstrate China's contribution to the world in terms of science and technology as well as the country's willingness to share these fruits with the world, said Zhang.

The pavilion embodies the goals of Expo 2020 Dubai, which are to connect minds, become more unified, and create a better future, said Dimitri Kerkentzes, secretary general of the Bureau International des Expositions, at the China Pavilion's opening ceremony.

China's participation in the Expo demonstrates its commitment and actions for global dialogue and cooperation around the future of people and the planet, he said.