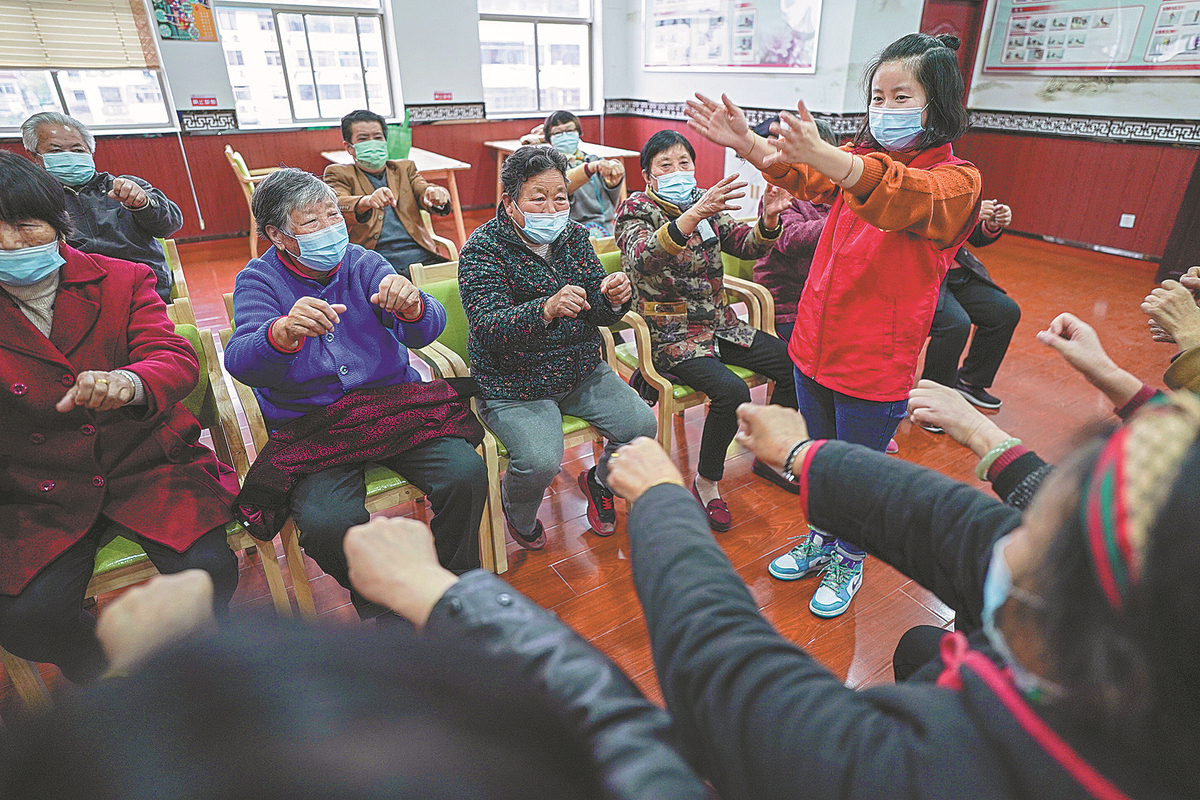 Seniors do finger exercises with staff members at an elderly care center in Yancheng, Jiangsu province, in November. [Photo/Xinhua]

National political advisers will continue to supervise the renovation and refurbishment of public facilities for the elderly, and to ensure issues related to an aging population are addressed so that senior citizens can live fulfilling and happy lives.

To ensure the implementation of major national plans, the National Committee of the Chinese People's Political Consultative Conference, the country's top political advisory body, launched a five-year program in 2021 to provide oversight of major government projects.

In line with the 14th Five-Year Plan (2021-25), work committees under the CPPCC National Committee supervise various areas, such as advancing elderly-friendly renovation projects, the construction of a modern industrial system in the Guangdong-Hong Kong-Macao Greater Bay Area, and the opening-up of China's western region to the outside world.

Among them, the Committee on Social and Legal Affairs under the CPPCC National Committee focuses on inspecting the age-appropriate renewal of facilities and services to provide better care for senior citizens, a key part of China's response to its aging population.

At a recent briefing given by the committee in Beijing, Wang Ercheng, its deputy head, said," Adapting our social system to an aging society is a serious challenge we are facing."

According to the Ministry of Civil Affairs, it is estimated that during the 14th Five-Year Plan period, the number of people aged 60 or above will exceed 300 million, accounting for over 20 percent of China's population.

Wang said that launching five-year supervision of the issue gives full play to the advantages of the CPPCC's talent pool and its unconventional status to ensure full consultation and oversight over the problem.

For the past two years, national political advisers in the social and legal affairs sectors have traveled to 26 districts and counties in eight cities in three provinces to conduct surveys, said Wang, who participated in all the surveys.

They spoke to more than 400 people to collect opinions. A survey covering 1,000 elderly households and 300 urban and rural communities was launched to run over five years. An online survey was also carried out to canvass more suggestions from netizens, Wang said.

"Satisfaction and recognition are continuously rising," Wang said, adding that there were many problems found during the surveys.

For example, installing elevators in old residential buildings is a common issue because of the varying needs of residents on different floors.

They also found problems with daily facilities used by the elderly, such as squat toilets, narrow doorways for wheelchairs, long and steep slopes in nursing homes, and large gaps between bus stops and station platforms, he said.

Based on the surveys, they compiled a report with opinions and suggestions to solve the problems, which was delivered to the Communist Party of China Central Committee for reference.

Wang said that the suggestions in the report prompted government sectors to make improvements.

For example, the State Administration for Market Regulation has led the establishment of a joint working group for strengthening unified standards and norms for the renovation of facilities.

The CPPCC National Committee held a meeting of the Chairperson's Council in November to hear reports on democratic oversight work delivered by a number of committees, and to discuss the focus of supervision work during the next steps.

At the meeting, Wang Yang, chairman of the 13th CPPCC National Committee, called on political advisers to raise the capabilities and quality of democratic oversight, and give full play to the CPPCC's role as a special consultative body in State governance.

Wang Ercheng said, "Through the practice and exploration of supervision work in the past two years, we have understood that the CPPCC's supervision is consultative and works in the same direction as the Party and the government."

Key to supervision is a focus on problem orientation and helping the government meet the needs and solve difficulties of the people, he said.

"The advisers should have a long-term vision, not be divorced from reality, and put forward practical opinions and suggestions.The work requires persistent effort carried out in the spirit of 'driving the nail home'," he added.

In the next three years, the committee will intensify its oversight to promote the implementation of the tasks set out in the 14th Five-Year Plan, to enhance the public sense of fulfillment, he said.