Jiang Minghan, a student at Wuyutan Primary School in Qufu city, Shandong province, said that her knowledge of Confucius, the ancient Chinese philosopher, improved enormously after spending a morning at an exhibition of his Analects, and trying more hands-on projects like copying and making rubbings of his teachings, at the museum dedicated to him in his hometown.

The 9-year-old was able to quote several of the sage's teachings easily. "I learned some at school, and here at the exhibition, I saw bamboo slips, stone inscriptions and old books whose pages have yellowed," she said, adding she was surprised to see Confucius' books printed not only in Chinese but in other languages as well.

The exhibition at the Confucius Museum in Qufu has placed more than 370 ancient items related to the Analects－a collection of the sage's ideas and sayings－on display in a bid to help the public better understand the ancient Chinese philosopher.

It will run for at least three months until the end of this year.

The items include documents from several dynasties, annotations on the Analects, bamboo slips bearing texts and a long scroll handwritten by a 12-year-old child during the Tang Dynasty (618-907). They have been assembled from museums and libraries across the country, including the National Library of China, the Chinese Academy of Cultural Heritage, the Gansu Bamboo Slips Museum, the Turfan Museum and the Confucius Museum.

"Almost every Chinese person knows Confucius and can recite some of his teachings. But after thousands of years, do we really know the man and his teachings? We hope to bring visitors closer to him," said the Confucius Museum's Tang Li, who planned and organized the exhibition.

For example, teachings advocated by Confucius and known to most Chinese, such as the sage's version of the Golden Rule ("Do not do unto others what you do not want done to yourself") are written on both sides of the exhibition entrance.

"Teachings that are familiar to most visitors will help trigger their interest in finding out more about Confucius," Tang said.

Inside the exhibition, lines from the Analects written on bamboo slips, stones, and in books printed using woodblocks and wooden movable types are on display to help visitors understand the sage's influence on China, and how it has been passed down.

Among the bamboo slips are some from the Han Dynasty (206 BC-AD 220) which bear words including Confucius' name. They were unearthed in Jinta county, Gansu province, in 1973.

In addition, a number of rubbings and books formerly preserved at the Confucius family mansion and passed down by generations of the sage's descendants are being exhibited for the first time.

The Confucius Museum houses nearly 700,000 relics once kept in the family home. "In addition to the rubbings, we've noticed variations on the same sentence from the Analects across different dynasties," Tang said.

"The differences mainly resulted from using different Chinese characters and didn't change the sentence's meaning substantially, but do show that people in different dynasties had different interpretations of Confucian thought," she added.

The exhibition has a section on Confucius' influence on other countries, especially Japan and South Korea. Books on Confucius printed in the 18th and 19th century in a variety of languages, including Japanese, German, English and Latin are on display, as well as one printed in French in London in 1783 and a trilingual series in Chinese, Manchu and Mongolian.

In front of the exhibition is a section where visitors can try writing on bamboo slips for themselves and then string them together to make a bamboo slip book.

They can also make rubbings and do woodblock and movable-type printing. "It looks easy to make a rubbing from a stone, but it's actually not. It takes strength, and you need to be patient and spread the ink evenly across the stone," Jiang, the primary student, said.

The exhibition attracted 40,000 visitors during the National Day holiday, a year-on-year increase of 45.5 percent, according to the museum. 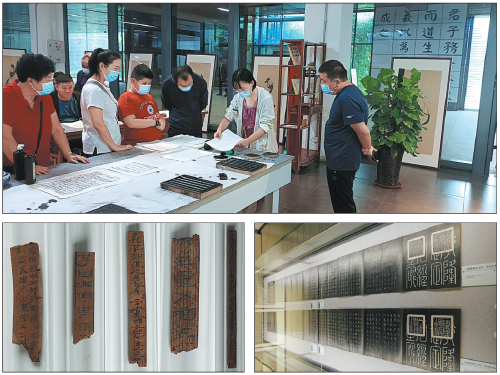 Clockwise from top: Visitors watch a worker preparing to use woodblocks to print lines from the Analects on paper at an exhibition in the Confucius Museum in Qufu, Shandong province. Rubbings of the Analects carved into a Qing Dynasty stone tablet are on display at the exhibition. Bamboo slips bearing texts from the Analects are also on display. CHINA DAILY