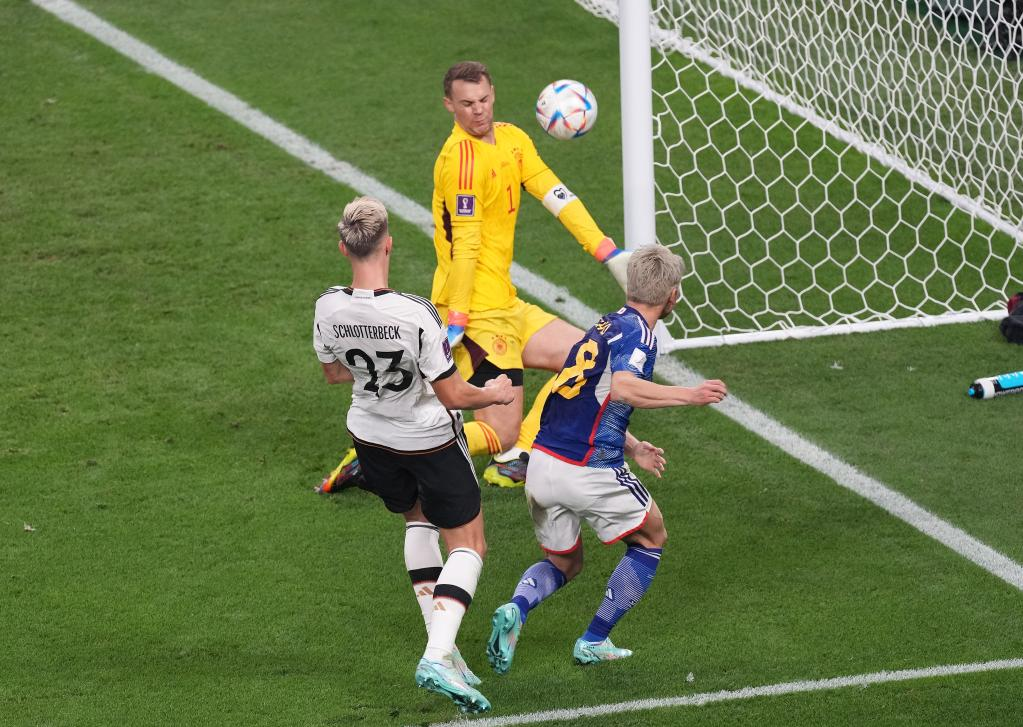 Asano Takuma (R) of Japan scores during the Group E match between Germany and Japan at the 2022 FIFA World Cup at Khalifa International Stadium in Doha, Qatar, Nov. 23, 2022. (Xinhua/Chen Cheng)

DOHA, Nov. 23 (Xinhua) -- Germany are staring down the barrel of their second consecutive exit at the group stage of the World Cup after a dramatic fourth day of competition in Qatar.

The Germans suffered a shock 2-1 defeat to Japan, who weathered a storm from the Germans and then hit back with two goals to take a historic win, with just 22 percent of possession.

Things looked to be under control for Germany when a poor challenge from goalkeeper Shuichi Gonda on David Raum gave them a 33rd minute penalty that Ilkay Gundogan scored.

Germany had chances to win the game, with Gundogan hitting the post on the hour. However, the Japanese hit back with substitute Ritsu Doan scoring from close range after a save from Manuel Neuer in the 75th minute, before Takuma Asano held off a defender and beating Neuer at the near post to seal the win eight minutes later.

The defeat means that if Germany lose to Spain on Sunday they will almost certainly be out of the tournament, and the Spanish sounded a warning as they began their World Cup with a 7-0 thrashing of hapless Costa Rica.

The game was a Spanish monologue from start to finish, with Dani Olmo opening the scoring in the 11th minute and goals arriving at regular intervals until the final whistle.

Marco Asensio added Spain's second in the 21st minute and Ferran Torres got his first of the night from the penalty spot on the half hour.

Torres got second goal from a tight ankle in the 54th minute and Gavi volleyed home the fifth in the 74th minute to become the youngest ever Spaniard to score in the World Cup finals at 18 years and 110 days.

Carlos Soler added a sixth after good work from Nico Williams and there was time for Morata to net the seventh in injury time to give Spain their biggest ever win at the World Cup finals.

That game was an antidote to the 0-0 between Morocco and Croatia that got Group F under way.

Coming to Qatar on a five-game unbeaten run, Morocco showed they are a side that has to be reckoned with and produced an energetic and robust defensive display to shut out the beaten finalists in 2018 in a match that saw just two efforts on target from each side.

Late on Wednesday night, Michy Batshuayi's goal in the 44th minute was enough to give Belgium a 1-0 win against Canada to go top of Group F, but Roberto Martinez' side rode their luck against a rival that missed a host of chances.

The best of those chances was a first half penalty from Alphonso Davis that was comfortably saved by Thibaut Courtois, as the Canadian hit a tame shot to the Belgian keeper's right.

Too often the Canadians snatched at their final shot and it was telling that although they had 21 efforts on the Belgian goal, only three (including the penalty) were on target.