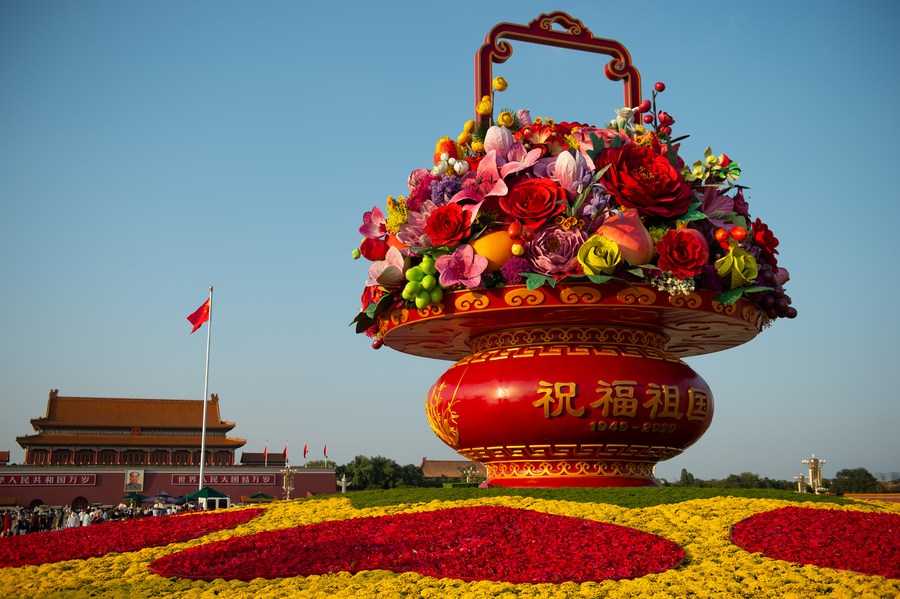 A huge flower basket arrangement with the theme "blessings to China" will be installed in Beijing's Tian'anmen Square as part of the plan to decorate the square and Chang'an Avenue — the capital's main thoroughfare — for the upcoming National Day holiday next month.

Since 1984, Tian'anmen Square in the heart of Beijing has hosted huge displays to celebrate the National Day holiday, with their design and related technology developing over the years.

The Beijing Municipal Forestry and Parks Bureau unveiled the plan for this year's flower basket arrangement on Thursday. The bureau said that construction work commenced on Sept 15 and is expected to be completed by Sunday.

Besides the main basket, 14 flower terraces bearing different good wishes to the country and showing the nation's achievements will be displayed along Chang'an Avenue.

Meanwhile, flowers will be planted covering a total area of 7,000 square meters between Jianguomen and Fuxingmen along Chang'an Avenue through the heart of the capital to create a celebratory atmosphere, said Liu Mingxing, head of the bureau's afforesting division.

The main floral arrangement in the center of the square, which has been an annual National Day decoration since 2011, will be 18 meters high, the same as last year, and the overall area of the decorations in Tian'anmen Square will be 5,050 square meters.

The 14 flower terraces along Chang'an Avenue will display different types of flowers and showcase a variety of themes related to the nation's development, such as innovation and green development.

Two of the flower terraces — one in the shape of a rainbow and the other resembling a Chinese knot — celebrate the upcoming 20th National Congress of the Communist Party of China, which is proposed to be convened in Beijing on Oct 16.

According to the bureau, up to 100 species of flowers will make their debut on the terraces — both local and imported, which will help make the decoration more vivid and colorful.

In addition to the square and Chang'an Avenue, all of the districts in the city will also have their own floral decorations, said Liu.

"Beijing will have a total of 50 themed flower terraces during the period and around 19 million plants will be used," he said. "All of the work will be completed by the end of this month."

Li Yunlu, a 30-year-old Beijing resident, said she would bring her parents to the square during the National Day holiday to take a family photo in front of the flower basket, which has become a tradition for the family.

"We feel very happy and cherish our good life more every time when we see the beautiful flowers and the smiles on the people's faces around us," she said.