SE China’s Fujian carries on intangible heritage of Zhangpu paper-cutting with nothing but colored paper, pair of scissors in 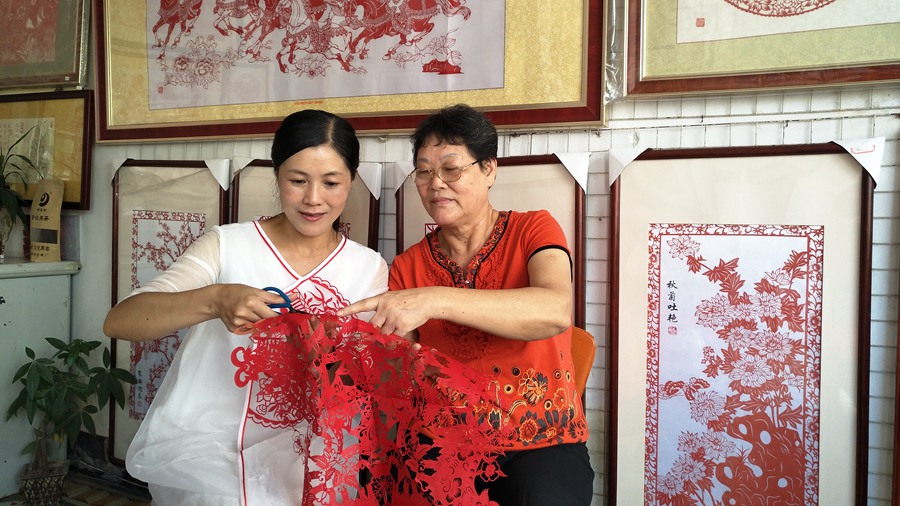 As a place well-known for its time-honored paper-cutting culture, Sui'an Township in Zhangpu County, southeast China’s Fujian Province, has recently been listed as one of the "Hometowns of Chinese Folk Culture and Arts" by China’s Ministry of Culture and Tourism.

After the Ming (1368-1644) and Qing Dynasties (1644-1911), Zhangpu paper-cutting, with its original techniques, became a unique artform in the Chinese tradition of paper-cutting, having become the representative style in the southern school of Chinese paper-cutting.

Zhangpu paper-cutting is based on a wide range of materials and offers a great medium to express a variety of scenes and content types, such as people’s working and everyday lives. In terms of composition, its focus is on achieving fullness, proportionality, symmetry and balance. In terms of color, Zhangpu paper-cutting is monochromatic, mainly making use of red materials, with other color choices adopted as complementary elements, which can have a strong overall decorative effect.

Chen Jin, Huang Su, Lin Tao, and Chen Paolai are four outstanding representatives of the southern school of paper-cutting and are known as the "Four Divine Cutters" in southern Fujian Province. They were farmers and fisherwomen, and paper-cutting was by no means their profession, but instead served as a kind of hobby. The four deceased artists have left behind invaluable heirlooms, influencing generations of aspiring paper-cutting artists in Zhangpu County.

Currently, Zhangpu County is home to a paper-cutting team of nearly 1,000 people in four generations: including seniors, middle-aged adults, youth, and children. Paper-cutting artists such as Chen Qiuri, Zhang Zhengrong, Gao Shaoping, Ouyang Yanjun, Li Xiaoyan, Chen Yanrong, Lu Shurong, and You Jinmei have absorbed the elements of various artistic genres from the north and south of the country and have kept abreast of the times. Many of their works have won awards in competitions held at home and abroad.

In terms of conservation and heritage, these paper-cutting artists continually strive to nurture fresh blood, either by running training courses in their art galleries or by teaching their paper-cutting skills to students hand by hand.