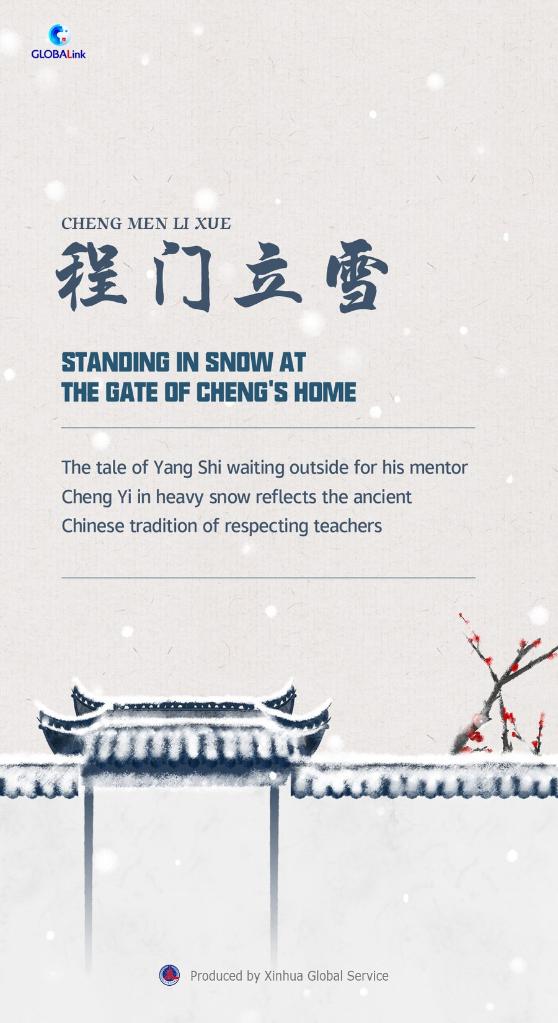 BEIJING, Jan. 8 (Xinhua) -- Honoring teachers and their intelligence has always been a tradition in China. Since ancient times, teachers have been respected by people as messengers of wisdom.

The famous Chinese idiom, "Cheng Men Li Xue," which literally means "standing in the snow at the gate of Cheng's home," is a wonderful example. "Cheng" refers to Cheng Yi, one of the leading philosophers of Neo-Confucianism in the Song Dynasty (960-1276). Attracted by Cheng's theory, Yang Shi, a talented, hardworking young man who loved reading and studying, worshipped Cheng as his mentor.

One day, Yang and his friend You Zuo had different opinions on one question. In order to get a proper answer, they went to Cheng's home for advice.

It was in the middle of winter. Feeling frozen by the wind and snow, the two men wrapped themselves tightly in their clothes and hurried on. When they arrived at Cheng's place, the gatekeeper said the master was taking a nap.

The two students did not complain. Instead, they chose not to disturb the teacher and waited outside the door, standing in heavy snowfall.

After quite some time, Cheng upon waking up became aware that his students had been standing still in the snow for a while and immediately invited them to come in. By this time, the snowfall was already one foot thick.

Zhang Guimei, the principal of the Huaping Senior High School for Girls in southwest China's Yunnan Province, won the July 1 Medal last year. The medal is the highest honor for outstanding members in the Communist Party of China.

She has been educating and aiding students in need, most of whom live in isolated and poor areas. The school has created a miracle for the girls: 1,804 graduates have been admitted to colleges at the end of 2020.