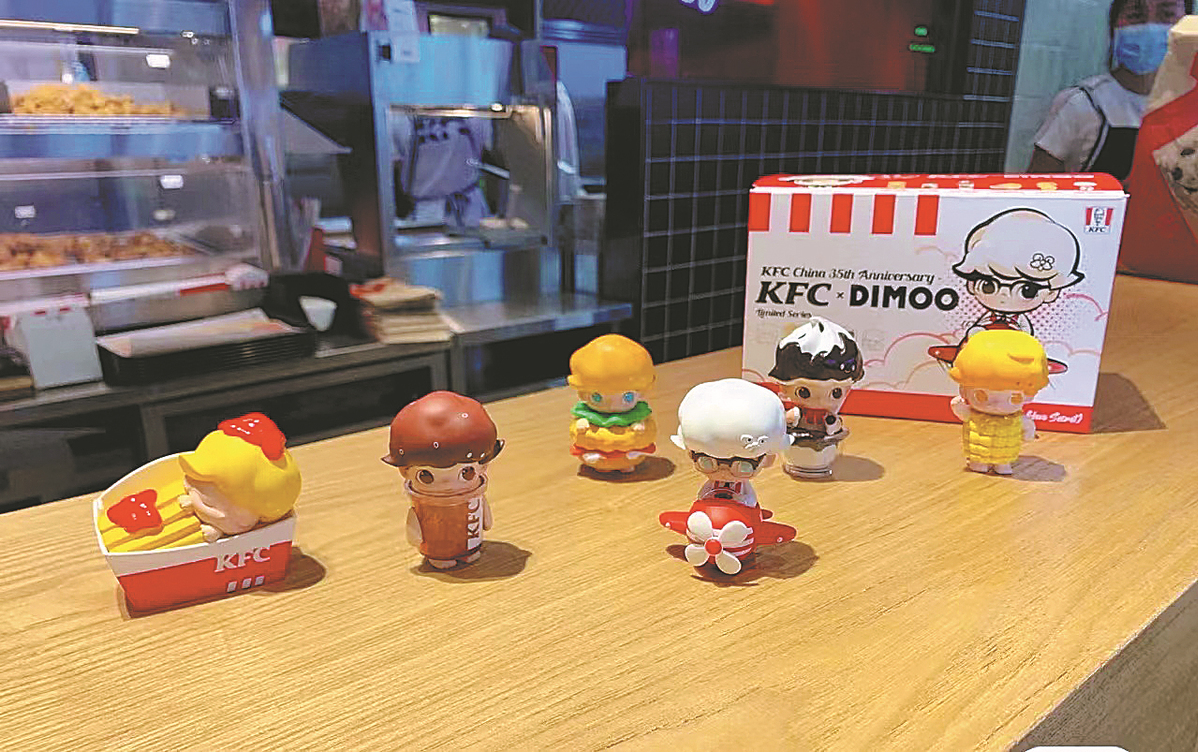 Some KFC & Dimoo toys are on display at a KFC store in Beijing. [Photo provided to China Daily]

The China Consumers Association is unhappy with fast food chain KFC, which is collaborating with Chinese blind box producer Pop Mart to sell a product by dangling a secret toy.

For 99 yuan ($15.56), customers can order a regular KFC chicken bucket or go for a co-branded one, which comes with a blind box containing a Dimoo, Pop Mart's original figurine. And if they are very lucky, the blind box could throw up a secret Dimoo. There are more than 260,000 pieces of seven types of toys — six specially designed KFC-themed Dimoo figurines, and the secret Dimoo.

Everyone seems to have a particular favorite Dimoo, for which some are willing to buy any number of buckets. It is particularly hard for those who want the secret Dimoo, the possibility of finding which is said to be 1 in 72.

The CCA criticized KFC on Wednesday, saying this kind of hunger marketing will make people buy more food than they need, leading to wastage of food.

The CCA feared the hype over Dimoo will trigger excessive consumption habits, even making people pay for others to have the special bucket and send them the Dimoo or just blindly buy dozens of buckets to collect a full set of the blind box figurines.

Well, a full set of 6 conventional KFC Dimoo, or just one secret KFC Dimoo, is already selling for more than 600 yuan on a second-hand trading app.

People should see through this second-hand trade in blind boxes at much exorbitant prices. Maybe it is time to once again tell people to be rational in their consumption and to think twice before spending their money in this manner.

Not long ago a hype was built around "limited edition" shoes, with dealers stocking up on them and suffering losses when there were few customers willing to pay the huge price for the shoes.

Those pinning their hopes on the blind box rush would do better to think again.