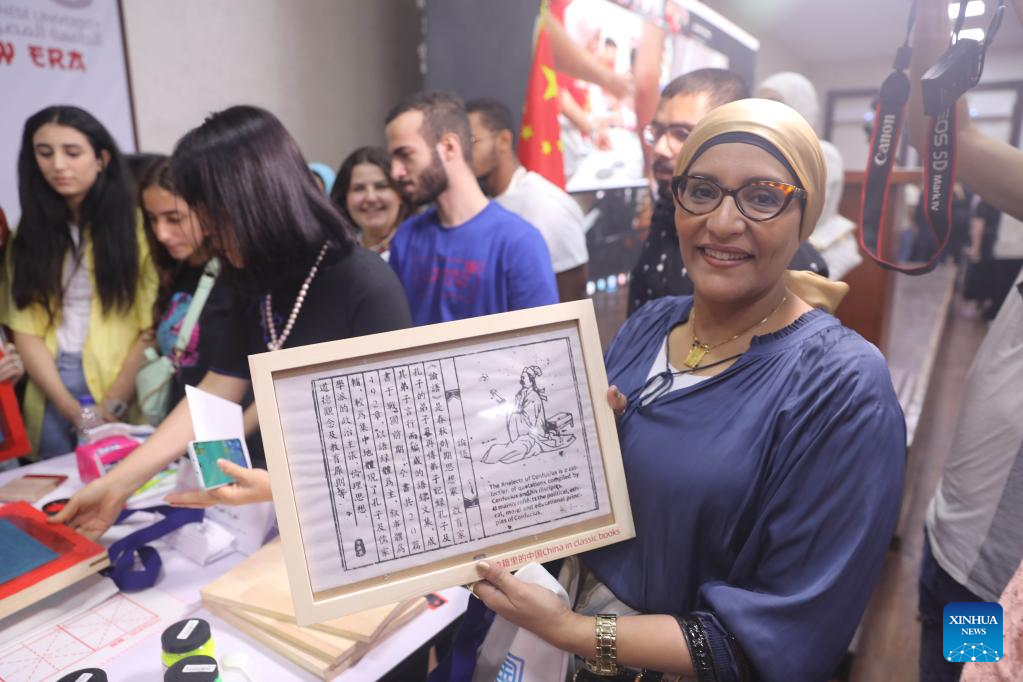 A teacher shows a woodblock printing work during a cultural exchange activity held between the young people of Egypt and China's Shandong province via video link, in Cairo, Egypt, on Sept. 14, 2022. (Xinhua/Ahmed Gomaa)

Entitled "China in Classic Books," the activity held on Wednesday between the young people of Egypt and China's Shandong province via video link, was organized by the Foreign Affairs Office of Shandong Provincial People's Government in cooperation with the Chinese Bridge Club in Cairo and the Egyptian Chinese University (ECU).

Adham Ehab, a student in the Chinese department at Cairo University, was making the thread-binding notebooks in the same way it's traditionally made in Shandong.

"Such activities make us know more about the Chinese culture and love the Chinese language more," the Egyptian student told Xinhua during the event.

Jiao Xinyue, a Chinese teacher at Cairo University who also teaches at the Confucius Institute of Cairo University, said that the increasing Chinese economic power and the growing cooperation between China and Egypt provide more opportunities for students learning Chinese.

The number of students in the Chinese language at Cairo University is on the rise every year, she added.

ECU vice-President Rasha El-Kholy said that "the event aims at connecting between the Egyptian and the Chinese cultures through learning about some traditional Chinese ways of printing and handicrafts, which resemble some of their counterparts in ancient Egypt."

"Connecting ancient civilizations can push us forward towards a future of innovation, research and development," he added.

Gianna Xu, head of the Chinese Bridge Club in Cairo, said "the cultural exchange between the youths of the two countries will deepen the friendship among future generations," hoping that such cultural activities will nourish "the tree of friendship and cooperation between China and Egypt."