From local to global, square dance is spreading charm 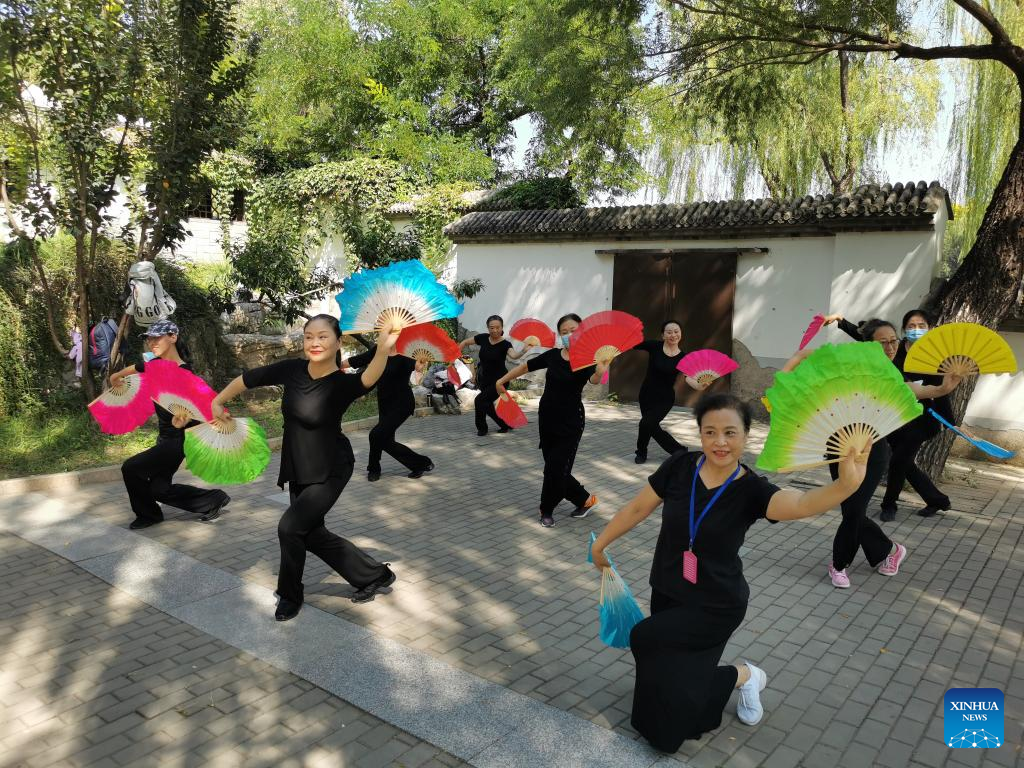 Members of a dance troupe at the cultural center in Beijing's Xicheng District exercise at a park in Beijing, capital of China, Sept. 8, 2022. Decked up in fancy attires, Li Fengwei and her teammates are busy lately, rehearsing for an upcoming square dance competition. (Xinhua/Tai Sicong)

BEIJING, Sept. 19 (Xinhua) -- Decked up in fancy attires, Li Fengwei and her teammates are busy lately, rehearsing for an upcoming square dance competition.

Li, 60, is a member of a dance troupe at the cultural center in Beijing's Xicheng District. Established in 2003, the team is currently comprised of more than 40 enthusiastic square dancers with an average age of over 62.

"We started from zero basics and everyone had different physical conditions and levels but we persevered with our love and passion for dance," said Li, who joined the team after retirement.

In addition to dancing, Zhao Huijie, 59, a member of the dance troupe, has taught herself basic editing skills so that she can arrange better music for their square dances. Her teammate Kong Hangyu has regained a healthy physique since she began dancing.

As the instructor of the dance troupe, Yue Xiaodong is delighted to see the positive impact square dancing has had on the lives of these elderly dancers. "Square dancing has created great value for themselves and helped them receive recognition," he said.

Yuan Liang, an official with the Beijing cultural center, said that there are currently more than 4,000 square dance groups in Beijing, and their choreography and costumes feature local characteristics.

Chinese square dancers have performed in countries such as France, New Zealand and the United States over the past years.

"Square dance differs from other professional dance genres as it can incorporate moves from any other dance style. It is not only a grassroots cultural activity that comes from people's daily lives but also closely linked with Chinese traditional culture," Yue said.

For the first time, square dance was included as a separate category in the recently announced Qun Xing national award for culture and arts in China. Li's dance team was awarded there.

"The award serves as a motivation for all the ordinary people who join the square dance activities," said Yuan, expressing hopes that square dancing can promote Chinese culture across the world.