Searching for answers to the riddles of history 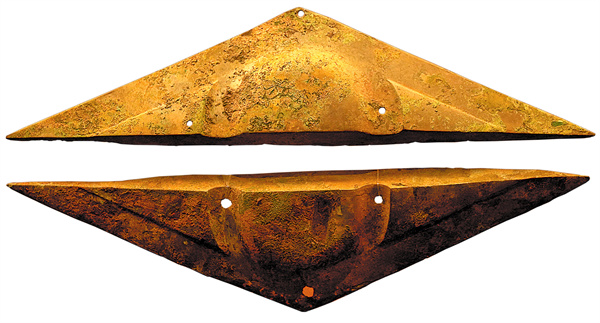 An eye-shaped bronze ware featured in the TV show, The Mystery of China, represents the mysterious aura of the Sanxingdui site in Guanghan, Sichuan province.[Photo provided to China Daily]

What secrets of Qinshihuang－the first Chinese emperor－did the Terracotta Warriors keep sealed underground for more than 2,000 years? Do bronze relics found at Sanxingdui in Sichuan province suggest that some ancient Chinese legends are true? Who was the first to leave inscriptions on oracle bones, the oldest-known Chinese writing system dating back more than 3,300 years?

The questions surrounding China's rich cultural heritage and history are numerous and a TV reality show is making an ambitious attempt to answer as many as possible.

The Mystery of China, a 12-part program co-produced by streaming media platform Youku and Henan TV, features six intriguing archaeological sites across the country. It has kept audiences riveted through a series of cliffhangers since it premiered on Sept 2.

From the 3,000-year-old Sanxingdui site to the Yinxu Ruins in Anyang, Henan province, the home of the oracle bones, the production team has raised the curiosity quotient for young viewers who are eager to decode umpteen historical riddles.

The show covers Qinshihuang's mausoleum; the Hejiacun trove in Xi'an, Shaanxi province, which reflected the cultural boom of the Tang Dynasty (618-907); Nanhai No 1, a Southern Song era (1127-1279) shipwreck off the coast of Guangdong province with a cargo full of Chinese ceramic items and the Mogao Caves in Dunhuang, Gansu province, a UNESCO World Heritage Site that marked the cross-cultural communication along the Silk Road from the 4th to 14th centuries.

"We wish to seize the highlighted moments in the development of the millennia-long Chinese civilization," says Li Bing, chief producer of the show. "From these highlights, we can better understand the cultural genes of our nation, and know who we are and where we come from."

Crossover is the buzzword behind this show. Actor Chen Kun, a household name, and Xinhua News Agency reporter Xu Danrui are the two leading explorers who make bold speculations from a layperson's point of view. Nonetheless, they stake out at archaeological sites, question experts and critically analyze clues to solve mysteries of history like detectives.

Digging at Sanxingdui is probably one of the best-recognized events in the archaeological circle in the recent past. Discoveries in 1986 amazed the world and the site continues to spring surprises even today. 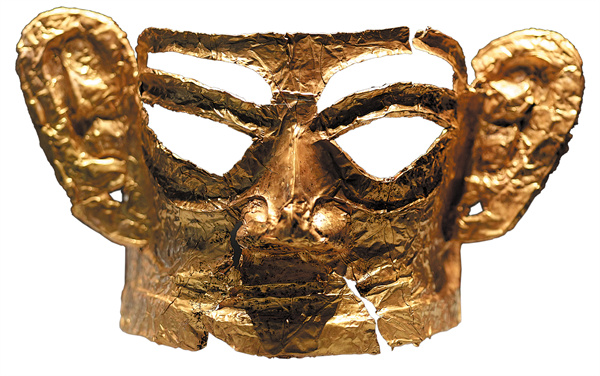 A gold mask is one of the highlighted artifacts unearthed from Sanxingdui in the new round of excavation since 2020.[Photo provided to China Daily]

Live broadcasts of the excavations last year and this year have made "TV stars" out of archaeologists working on the site, while unearthed artifacts, such as a gold mask, add to the enigma.

The findings may help unravel the mysteries of the ancient Shu state, but they also raise questions. The ancient state lasted for more than a millennium until its fall during the Warring States Period (475-221 BC) and yet the relevant historical recordings are insufficient.

A bronze divine tree with nine sacred birds, representing "the nine suns", makes Chen and Xu wonder whether it is linked to stories recorded in the Shanhaijing (Classics of Mountains and Seas), a milestone book on geography and mythical beasts that dated to the 4th century BC.

During their interaction with Lei Yu, the lead archaeologist at Sanxingdui from the Sichuan Provincial Cultural Relics and Archaeology Research Institute, the two explorers realize that some myths have concrete historical foundations even if they were largely exaggerated over time.

As to several legendary rulers of the ancient Shu state, who were said to live on, their seeming immortality was likely the embodiment of various dynasties that lasted for centuries.

"The same stories have been told many times. We wanted to explore a new approach. We wanted to decode myths in a way that felt fresh. The plan may not be perfect, but it was definitely worth a shot," producer Li says.

Chinese-style animations and computer-generated special effects are used in the show. Li says they help trigger the romantic imagination. "If we just speak about how prosperous the society was under the Tang Dynasty, people only get a general impression, but they don't literally feel the opulence that existed. This is where special effects come in." 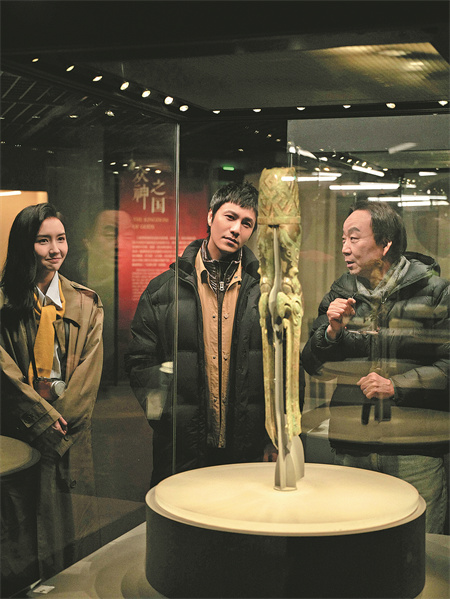 The animations also borrow from abstract expressions in traditional paintings to create the right atmosphere. "Animations can help people relate to certain things better because they create room for imagination," he emphasizes.

Li concedes that bringing celebrities to the show was necessary for an extra edge. "We could not entirely rely on expert narration to finish this program," he says. "It needed a breakthrough to go beyond pure documentary. The old way is more secure, but we cannot always stick to it. Creativity can bring a bigger group of people into the world of cultural relics."

Regardless of the means used, historical and academic accuracy have remained the show's foundation.

According to co-producer Deng Ruiling, 62 archaeologists, historians, scientists and other experts from 37 institutions were interviewed for the show, and 32 finally appeared in the episodes.

"We had to read reams of academic papers before we spoke to the experts," Deng says, recalling the tough eight months that went into preparing for the show. "We proposed ideas and revised them based on expert opinion. We revised lines again and again, some as many as 15 times."

There were several sentimental moments that were not scripted though. Cui Yong, the Nanhai No 1 project leader and a first-generation Chinese underwater archaeologist who is due to retire soon, could not hide his emotions when he told Chen how lucky he was to dedicate his entire career to unraveling mysteries of the shipwreck.

"A lifetime on a ship. Everyone at the production was so deeply touched," Deng says. "When stories of pure dedication are told in plain words, you can feel the surge of emotions inside you."

Although the target audience of the show is the young generation, it has won applause from veterans and professionals alike. "The theme of history and mystery has resonated with the masses, particularly because of the Q&A," comments Lu Qiong, an official with the National Cultural Heritage Administration.

"The views are well-balanced in the show. It encourages people from various walks of life to promote our cultural heritage. That is how the influence of ancient Chinese civilization can be broadened," Lu adds.