24 Solar Terms: 7 things you may not know about Minor Snow 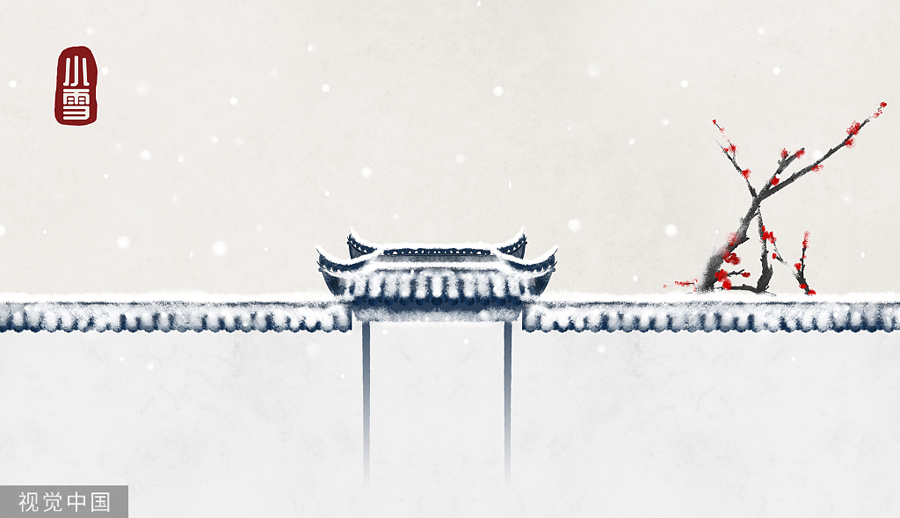 The traditional Chinese solar calendar divides the year into 24 solar terms. Minor Snow, (Chinese: 小雪), the 20th solar term of the year, begins this year on Nov 22 and ends on Dec 6.

Minor Snow refers to the time when it starts to snow, mostly in China's northern areas, and the temperature continues to drop.

Here are seven things you should know about Minor Snow.

An ancient Chinese book about plants explains that "in Minor Snow, the weather is cold and it is going to snow, while the earth is not frozen enough and the snow is light." The temperature in most areas in the north drops to zero degrees and below. Meanwhile, in the lower and middle reaches of the Yellow River, the average time of the first snow falls during the Minor Snow solar term. The snow is light and frozen at night, but melts quickly during the day.

In China, starting in Minor Snow, the wind blows from the northeast a lot. Because it's still not bitterly cold, many people do not wear hats or scarves yet. In fact, according to an old Chinese saying, "the head is the place where all passages of the body gather". It's sensible to keep one's head warm.

During Minor Snow, indoor heating begins to work, which means the air indoors is dry and most people might find their nose and mouth feels a bit dry. According to practices in traditional Chinese medicine, this accumulation of "inner heat" in one's body can cause problems, including oral ulcers and breakouts. The solution is to drink more hot soup, such as cabbage and bean curd soup, spinach and bean curd soup, and mutton and radish soup.

After Minor Snow, the temperature declines sharply and the air becomes dry. It is the best time to start making preserved pork, which by the Chinese Spring Festival would be ready to enjoy. In the past, when storage conditions were poor, people developed many ways to store food and preserved pork is one such example. So even in the bitter winter, the whole family could enjoy meat. Some even say preserved pork tastes more delicious than fresh meat.

For thousands of years, the people of Nanjing, Jiangsu province, have welcomed Minor Snow with pickled vegetables made in different ways.

On cold days, people may crave some hot and spicy food to keep warm. Experts say it's wise not to eat overly spicy food, since that will increase your inner heat.