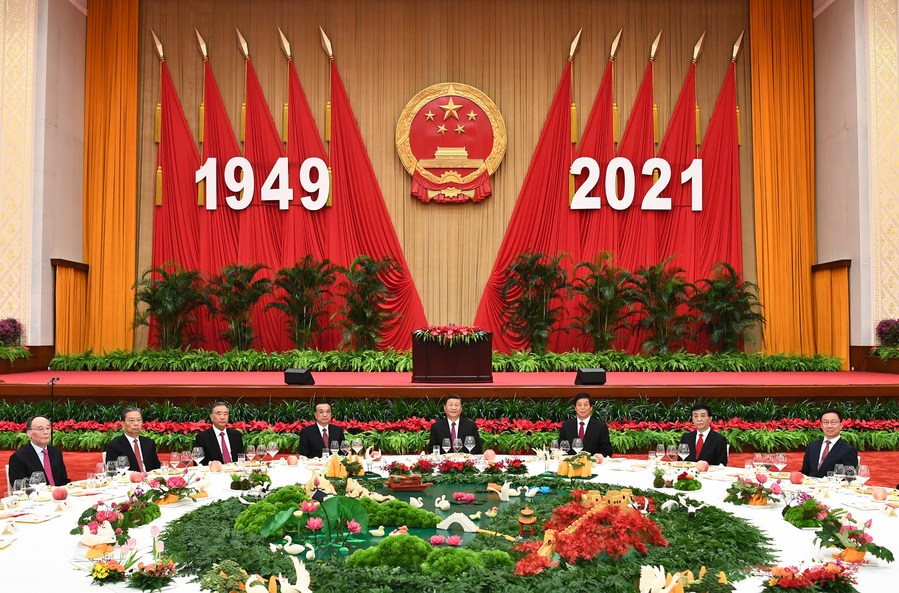 The Communist Party of China and state leaders Xi Jinping, Li Keqiang, Li Zhanshu, Wang Yang, Wang Huning, Zhao Leji, Han Zheng and Wang Qishan, attend a reception to celebrate the 72nd anniversary of the founding of the People's Republic of China along with nearly 500 guests from home and abroad in Beijing, capital of China, Sept. 30, 2021.(Xinhua/Xie Huanchi)

BEIJING, Oct. 1 (Xinhua) -- Amidst fluttering flags and floral decorations on the streets and public squares, the People's Republic of China (PRC) celebrated its 72nd birthday, rejoicing the fruitful achievements of the past year and envisioning a bright future ahead.

The year 2021 marks the centenary of the Communist Party of China (CPC) and China has realized the goal of building a moderately prosperous society in all respects, with absolute poverty eliminated.

After realizing this first centenary goal, China has embarked on a new journey under the leadership of President Xi Jinping, also general secretary of the CPC Central Committee and chairman of the Central Military Commission, toward the second centenary goal of fully building a great modern socialist country by the time the PRC turns 100.

On July 1, Xi declared the realization of the first centenary goal when he addressed a gathering in Tian'anmen Square to celebrate the CPC's centenary.

Achieving moderate prosperity, or Xiaokang in Chinese, was an aspiration for a well-off life held by the Chinese people for generations. At the time the PRC turns 72, this has become a reality.

Measured by multiple standards such as the economy, democracy, science and education, culture, society and people's lives, moderate prosperity lays a solid foundation for the world's most populous country to realize national rejuvenation.

The most prominent achievement was the eradication of absolute poverty, a milestone made possible after an unprecedented nationwide war against poverty led by Xi. In the past eight years, the final 98.99 million impoverished rural residents living under the current poverty line had all been lifted out of poverty.

On Feb. 25, Xi announced that China had secured a complete victory in its fight against poverty.

"Today, we are closer, more confident, and more capable than ever before of making the goal of national rejuvenation a reality," Xi said. 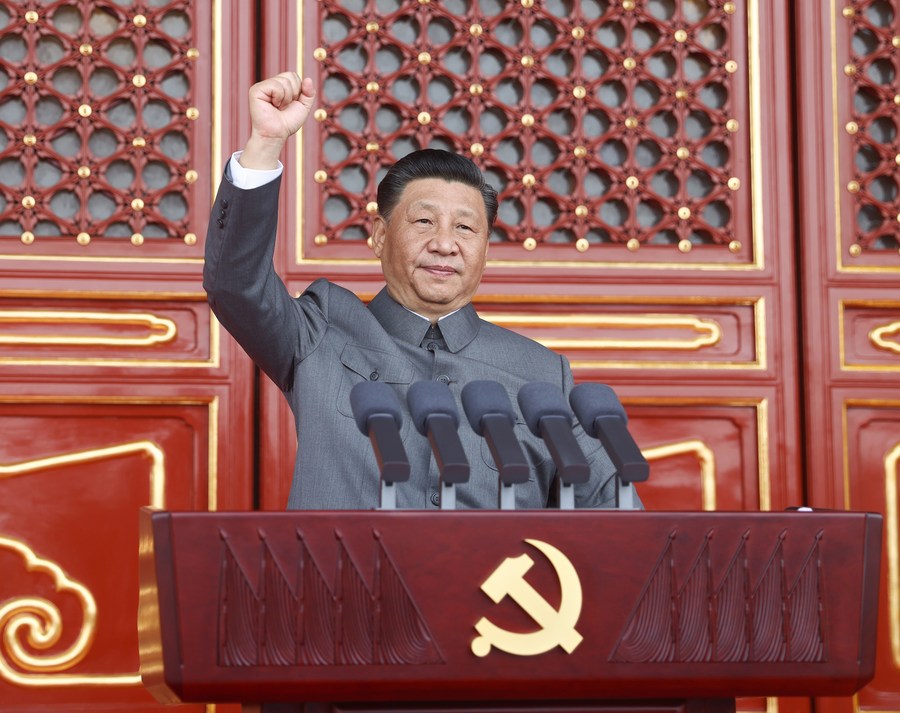 Xi Jinping, general secretary of the Communist Party of China (CPC) Central Committee, Chinese president and chairman of the Central Military Commission, delivers an important speech at a ceremony marking the 100th anniversary of the founding of the CPC in Beijing, capital of China, July 1, 2021. (Xinhua/Ju Peng)

"We have laid a solid material foundation to embark on a new journey and achieve new and higher goals by our unremitting endeavors since the founding of the New China, especially over the four decades since the reform and opening up."

Xi made the remarks when addressing the opening of a study session at the Party School of the CPC Central Committee in early 2021, calling for efforts to ensure a good start for fully building a modern socialist country.

On June 23, Xi spoke with the three astronauts stationed in Tianhe, the core module of the space station independently built and operated by China.

"The construction of the space station is a milestone in China's space industry, which will make pioneering contributions to the peaceful use of space by humanity," he told the astronauts via a video call.

This year, Xi has inspected several sci-tech companies, where he repeatedly highlighted the importance of self-reliance in the field of high-level sci-tech innovation.

Just days before the National Day, Xi called for efforts to speed up China's upgrade toward a major world center of talent and innovation, saying that never in history has China been in greater need of talented people.

Specifying the objectives for talent-related work, Xi said that by the year 2025, China will have substantially increased its total R&D spending, and boasted a large number of scientists and technologists in strategically important and core technological fields, top-level sci-tech leaders and innovation teams.

Capitalizing on its victory in eradicating absolute poverty, China is ramping up efforts to propel rural vitalization, which is "a major task in realizing the great rejuvenation of the Chinese nation," as Xi put it.

The country has been working to foster rural industries, promote the application of agricultural technologies and build beautiful countryside.

In the past year, Xi emphasized promoting rural vitalization in various spots across the country, be it a Tibetan carpet factory in Qinghai, an embroidery workshop of the Miao ethnic group in Guizhou, a tea farm in Fujian or a grape farm in Guangxi.

Rural China has great potential and can play an important role in fostering the country's new development paradigm of "dual circulation," which has a strategic basis on expanding domestic demand, he said, emphasizing that the key to rural vitalization lies in developing industries that suit local conditions and benefit local people.

Common prosperity is an essential requirement of socialism and a key feature of Chinese-style modernization, Xi said, calling for adhering to the people-centered development philosophy and promoting common prosperity while pursuing high-quality development.

Rather than being egalitarian or having only a few people prosperous, common prosperity refers to affluence shared by everyone, both in material and cultural terms, and shall be advanced step by step.

Efforts will be made to properly deal with the relationship between efficiency and fairness, make basic institutional arrangements on income distribution, adjust excessive incomes and prohibit illicit income to promote social fairness and justice, according to the 10th meeting of the Central Committee for Financial and Economic Affairs held in August.

One of the key characteristics of China's socialist modernization is human-nature harmony, Xi pointed out.

He has repeatedly underscored the importance of environmental protection in inspection trips and chaired several high-level meetings on advancing ecological civilization this year.

Xi stressed the importance of improving global environmental governance, actively responding to climate change and creating a community of life for man and nature, in his statement delivered via video at the general debate of the 76th session of the United Nations General Assembly in September.

Xi also reiterated the commitment he made last year that China will strive to peak carbon dioxide emissions before 2030 and achieve carbon neutrality before 2060.