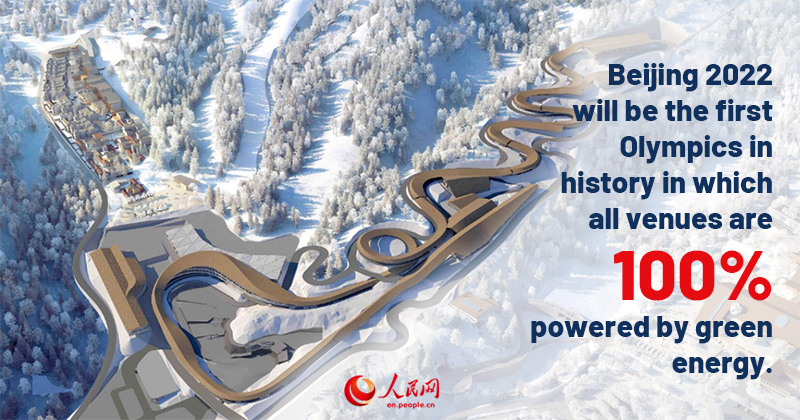 The Beijing 2022 Winter Olympics(Beijing 2022), which is scheduled to kick off next February, is set to make history as it will become the first ever Olympic Games fully powered by green energy.

Climate activists have long criticized the Olympics Games for the environmental damage the international sporting competition generates through construction, long-distance transportation, and the accumulation of waste. While professional athletes go for the gold, going green has become a global movement, with more and more people pushing for a cleaner and environmentally-friendly games. Beijing 2022 offers a playbook for future hosting countries to create a greener and more sustainable Games.

By committing to the mission of hosting a "green, sharing, open and clean" Winter Olympics, Beijing 2022 will be the greenest and cleanest Olympic Games ever. It is the first time in the history of the Olympics that all venues are 100 percent powered by green energy, with the ice-making technology adopted producing zero emissions.

In 2019, the Beijing Organising Committee for the 2022 Olympic and Paralympic Winter Games (BOCOG) issued a Carbon Management Plan, proposing 18 measures to reduce carbon dioxide emissions in guiding its endeavors towards achieving a carbon neutral Games. Green power supplies, green venue construction, and low-carbon transportation are some of the highlights among these measures.

At the outskirts of Zhangjiakou, the co-hosting city for Beijing 2022, the Zhangbei flexible direct current power project just completed its annual assessment before the start of Beijing 2022. The project, which has been put into operations since 2020, is able to deliver 14 billion kilowatt-hours of electricity generated using wind, photovoltaic, and other green and clean power sources to Beijing every year, fully meeting the power needs of all 26 venues for Beijing 2022. 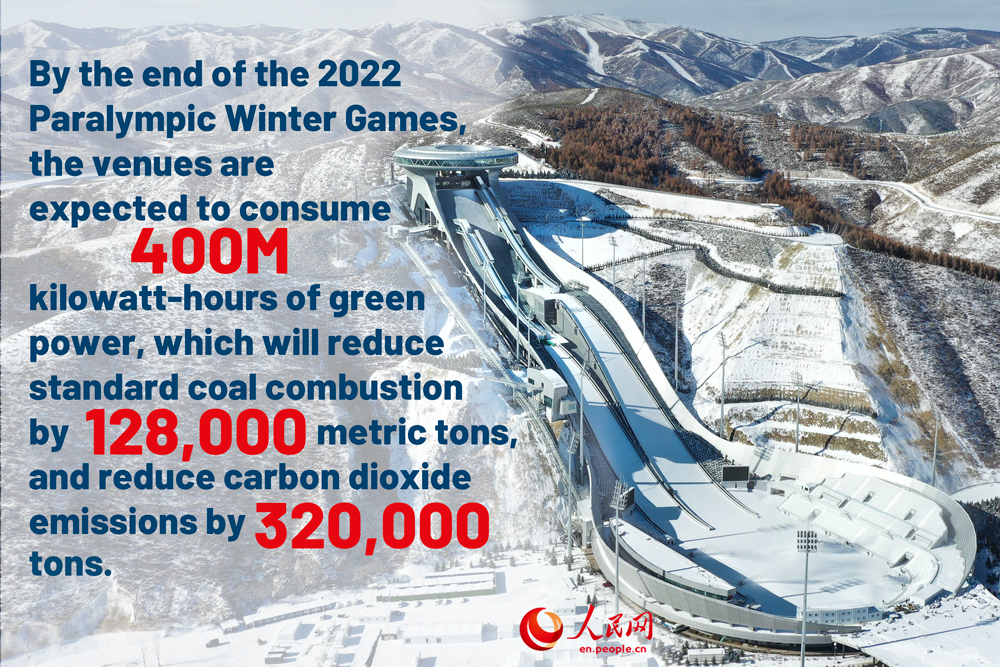 "As of May 26th, 19 venues for the Games are being powered by green electricity in advance during construction and all venues will use the clean energy supply during the Games," said Liu Yumin, director of the Planning and Construction Department at BOCOG. "By the end of the 2022 Paralympic Winter Games, these venues are expected to consume 400 million kilowatt-hours of green power, which will reduce standard coal combustion by 128,000 metric tons, and reduce carbon dioxide emissions by 320,000 tons." 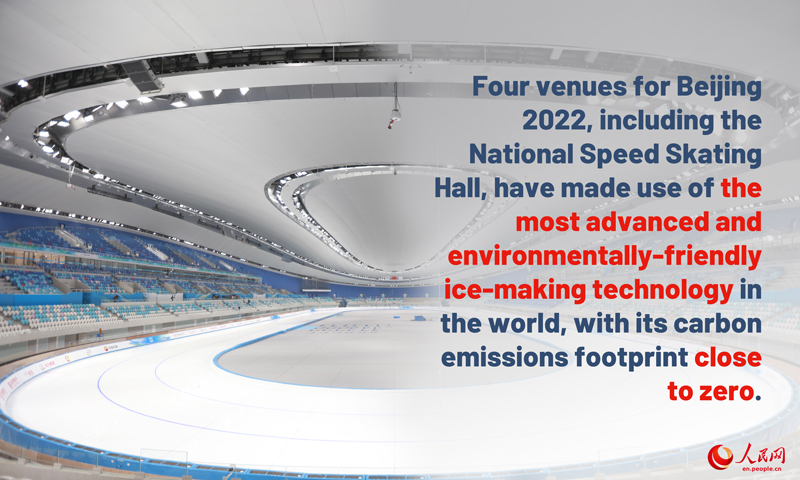 To make the Games as environmentally sustainable as possible, China has prioritized the construction of green venues. All of the newly-built venues use optimized construction materials that meet the three-star standard of green buildings. Cutting-edge technologies were adopted at venues to reduce carbon emissions. For instance, four venues, including the National Speed Skating Hall, have made use of the most advanced and environmentally-friendly ice-making technology in the world, with its carbon emissions footprint close to zero. For the first time in Olympic history, carbon dioxide was used as a refrigerant during the ice-making process at skating rink venues. Compared with the traditional refrigeration approach, this method for making ice requires less time and is 30 percent more efficient.

Apart from the newly-constructed green venues for the Beijing 2022 Winter Games, China has revamped eight of the venues constructed for the Beijing 2008 Summer Games in an attempt to save space and reduce unnecessary waste from demolishing and constructing new structures. The Water Cube will be transformed into the Ice Cube, with the revamped venue set to host the curling events. Moreover, the Opening and Closing Ceremonies will take place once again at the Bird's Nest.

"Beijing 2022 will be the Olympic Winter Games deploying the highest proportion of environmentally-friendly vehicles in history," said Zhao.

During the event, the application of the new energy vehicles is expected to reduce about 11,000 tons of carbon dioxide emissions, equivalent to the carbon sequestration of more than 30 square kilometers of forest in a year.

Legacy of environmental and social good

While the world's top athletes make their mark at Beijing 2022, China is also mapping out an enduring future, with a variety of sustainability goals that will live on long after the competition comes to an end.

The most prominent green legacy created by Beijing 2022 will be its new renewable power and transportation project. The Zhangbei power project will continue to deliver clean electricity to tens of millions of Beijing residents after Beijing 2022, drastically reducing carbon dioxide emissions. The project is expected to save 49 million tons of standard coal and 12.8 million tons of carbon dioxide emissions each year.

The transportation network for Beijing 2022 will lay a solid foundation for further developing green transportation systems in the two cities serving the Games for many years to come. With an eye on encouraging the adoption of green energy vehicles, charging facilities have been built at venues and along roads between Beijing and Zhangjiakou. After Beijing 2022, the charging facilities will be operated for community use, meeting the energy supply-demand needs of hydrogen fuel and pure electric vehicles in the future.

In keeping with international sustainability standards, venues serving the Games will be given a second life after Beijing 2022. Being transformed into public sporting facilities, these venues will be opened up to the public, helping to position the region as a winter sports hub looking forward. Genting Snow Park in Zhangjiakou, the venue that will host freestyle skiing and snowboard competitions during Beijing 2022, will reopen as a ski resort to the public and for sightseeing, while the Winter Olympics Village in Zhangjiakou will be converted into ski lodgings for winter sports lovers.

"These types of sustainable arrangements will avoid the dilemma most Olympics host cities will face – letting their costly venues lie idle," said Wang Yanxia, a member of BOCOG.